Given only a real single-view image collection of “revolutionary” (i.e., solid of revolution) artefacts with known silhouettes as training data (left), our framework learns to de-render a single image into shape, albedo and complex lighting and material components, allowing for novel-view synthesis and relighting (right).

* This work was primary done while Shangzhe Wu was interning at Google Research.

Recent works have shown exciting results in unsupervised image de-rendering—learning to decompose 3D shape, appearance, and lighting from single-image collections without explicit supervision. However, many of these assume simplistic material and lighting models. We propose a method, termed RADAR† (Revolutionary Artefact De-rendering And Re-rendering), that can recover environment illumination and surface materials from real single-image collections, relying neither on explicit 3D supervision, nor on multi-view or multi-light images. Specifically, we focus on rotationally symmetric artefacts that exhibit challenging surface properties including specular reflections, such as vases. We introduce a novel self-supervised albedo discriminator, which allows the model to recover plausible albedo without requiring any ground-truth during training. In conjunction with a shape reconstruction module exploiting rotational symmetry, we present an end-to-end learning framework that is able to de-render the world's revolutionary artefacts. We conduct experiments on a real vase dataset and demonstrate compelling decomposition results, allowing for applications including free-viewpoint rendering and relighting.

† Note the name itself is a "revolutionary" palindrome.

De-rendering from a single image

Novel view rendering and relighting from a single image

images from The Metropolitan Museum of Art Collection 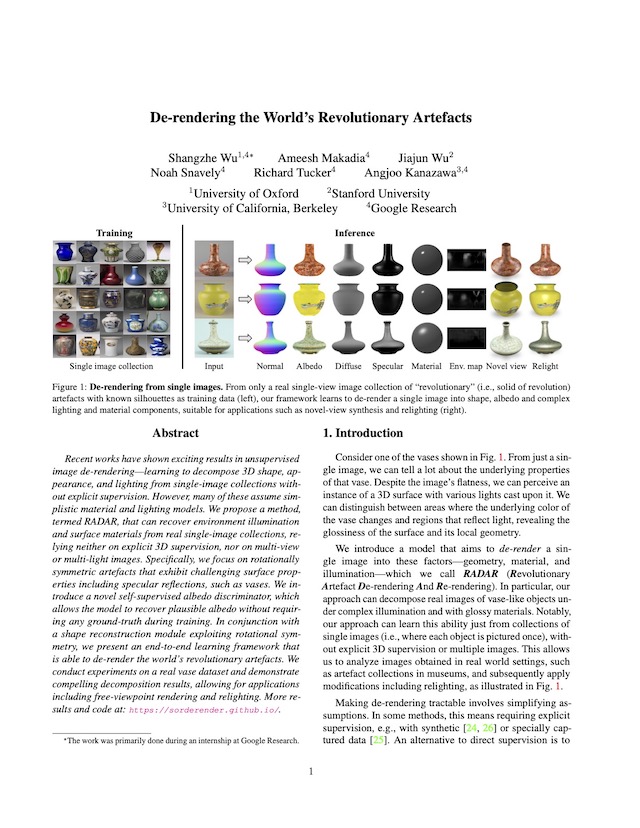 We would like to thank Christian Rupprecht, Soumyadip Sengupta, Manmohan Chandraker and Andrea Vedaldi for insightful discussions. The webpage template was adapted from Richard Zhang's and Jason Zhang's templates.